We love to spend new year’s eve touring. Last year we visited Ajodhya and now what could be the plan for this year, we needed to think. We drafted a plan to visit Gangani and Bishnupur on day-1, night stay at Bishnupur and visit Mukutmanipur on day-2. But, I was anxious as: (i) Mukutmanipur is not connected by rail: so we didn’t have any idea how to return from Mukutmanipur to Kharagpur and, (ii) a whole day for only Mukutmanipur seemed a bit relaxed. Hence, on second thought for day-2, I replaced Mukutmanipur with some hills from Bankura: Biharinath, Susunia and Koro and subsequently changed the night stay from Bishnupur to Bankura. I felt staying near a railway station is pretty good to avail economic food and ease in booking cheap vehicles. While planning for trips, these days, I feel like making a bouquet of flowers: picking themed flowers and placing as would fit. Finally, I was happy with the plan: Gangani – Bishnupur – Bankura – Biharinath hills – Susunia hills – Koro hill.

According to plan, I booked an accommodation at Hotel Blue star, in walking distance from Bankura station, costing us Rs. 500 for a room accommodating 3 people. No reservation could be made for the trains as they already ran out; so we opted for general compartments in Express trains. The plan was finally ready the day before, the packing was done and we celebrated it with a late-night party; so late that some fellow-travelers got doubt whether the trip would actually happen. Some friends who were not going in this trip, even were suggesting to drop the plan and join for cricket matches the day-after. I didn’t force myself taking any decision for then: I would do based on when I would wake up, I thought. Just for the trip’s sake, I put an alarm at 6 am and slept.

The alarm woke me up at 6 am, I got shaved, took bathe and got ready by 6 45 am. The auto came in time and we started for Kharagpur station as scheduled. Winter trains are late as usual allowing us to have our breakfast over Puri, Idli and Sambar badas at station premises. When we reached a probable platform, we saw the rail-lines were wiped out and was looking like farming-lands just before planting seeds.

Opening of two new platforms (7 & 8) in Kharagpur station, has created a morning-walk session for travelers: from platform 1A to 8 would be more than a kilometer. We were waiting long as the train got later; so we concentrated on trip-start-wala-selfie. 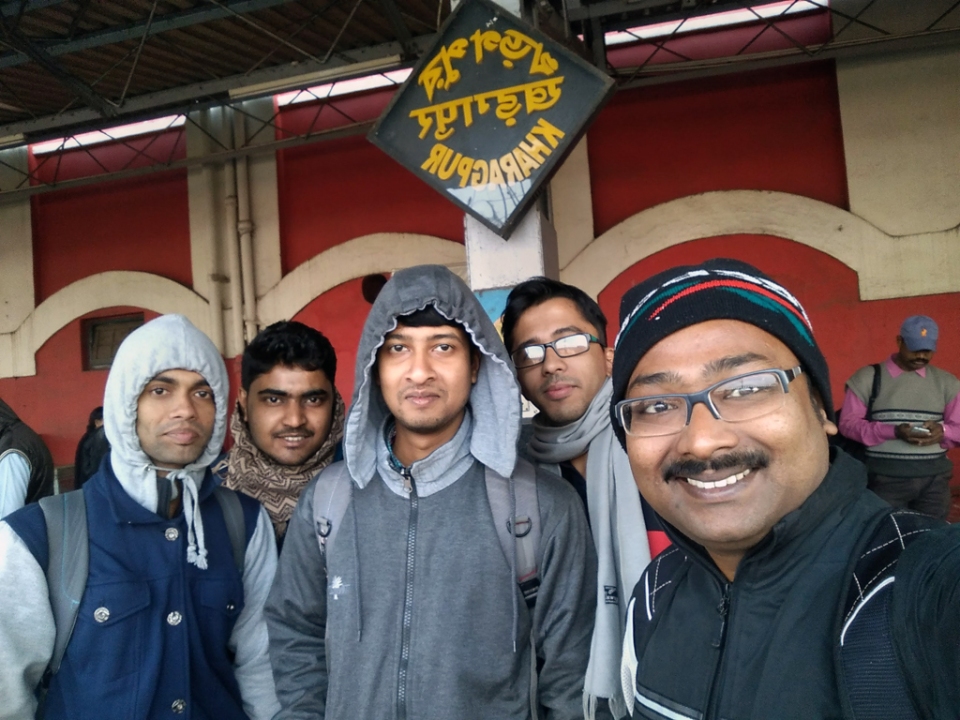 Finally we lost hope on the train. Although we booked general tickets for Rupasi Bangla Express, we boarded Kharagpur–Hatia passenger offering confirmed seats for us. By the time Rupasi Bangla finally arrived, we got cozy in our seats. Until the train reached Garhbeta station by 10.15 am, we had a round of playing cards and sleep. At Garhbeta station, we booked an toto for five of us for Rs. 150 for a round-trip to Gangani.

The toto stopped near a Kali temple outside Gangani to avoid parking hazards.  We visited the temple and walked for 10 minutes to reach Gangani canyon site. 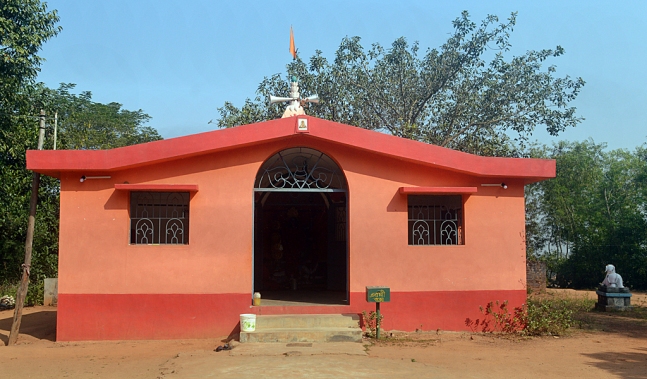 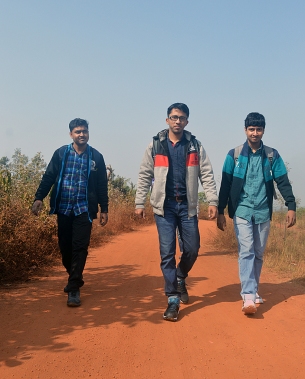 Gangani, located aside Shilabati river, is lovingly called the ‘The Grand Canyon of West Bengal’. Due to weekend, Gangani like other local tourist spots turned crowded. I liked the canyon of Bengal too much: being a new class of landscapes for me.

We climbed up the gorges and walked beside the river for about 30 minutes. 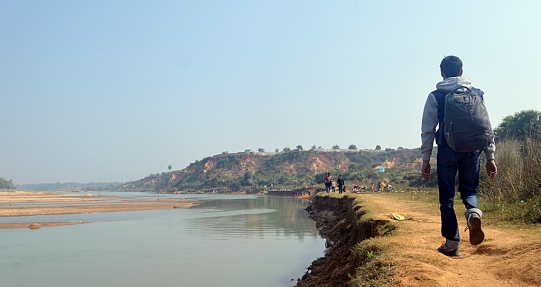 We found some tourists arranging breakfast for their picnic where … 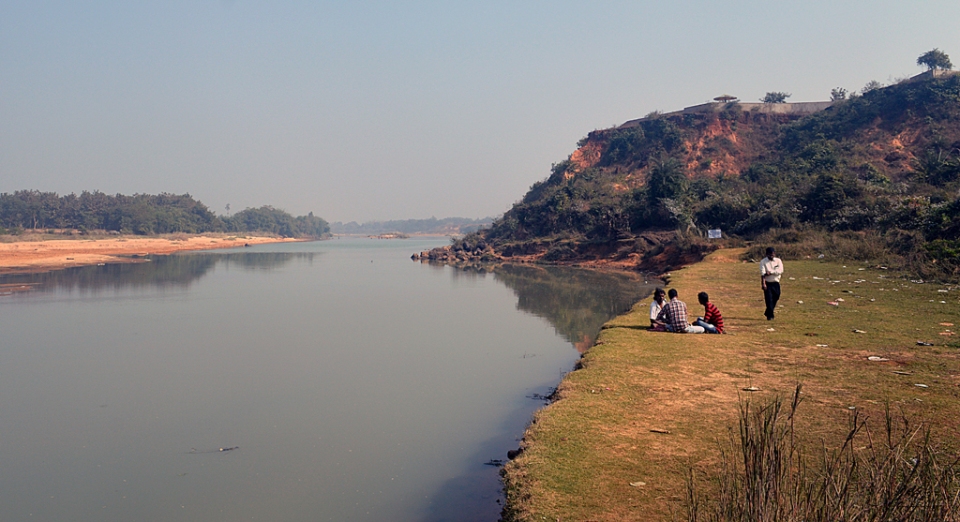 … some locals busy with their daily ordeals. 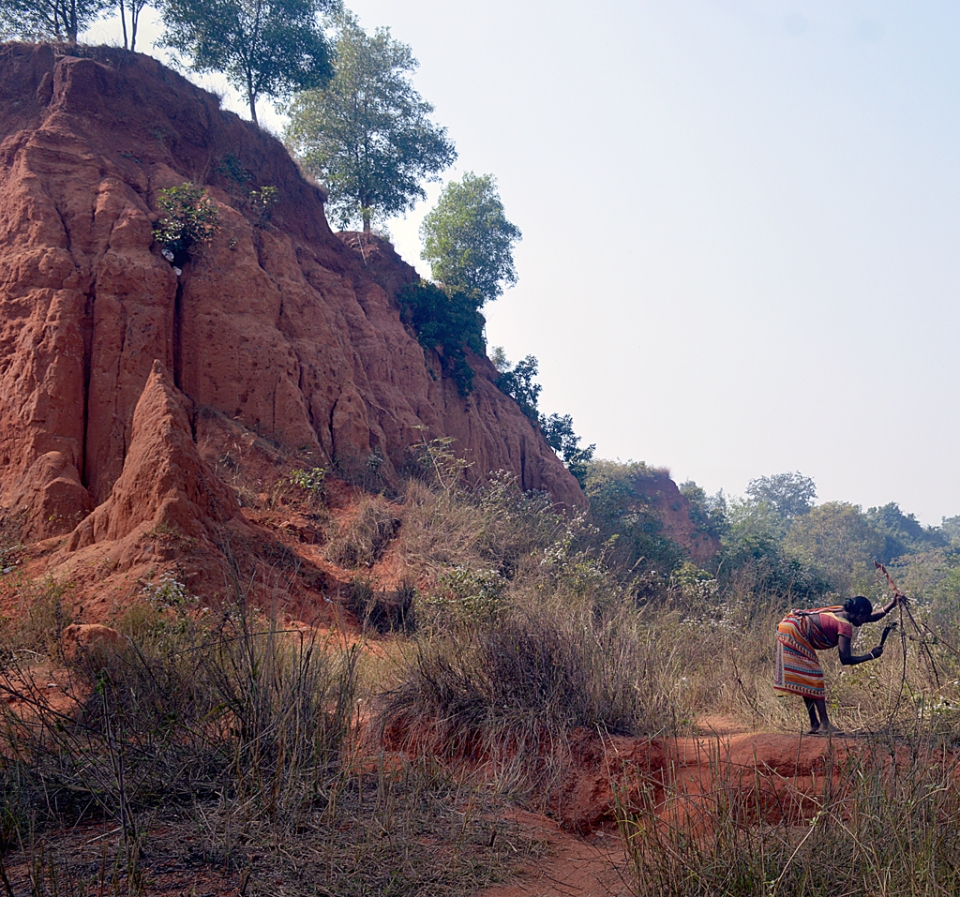 Now, it was time to return.

We called the toto and reached Garhbeta station by 12 pm. We had tea at station premises and waited long until the 12.18 pm Midnapore–Adra MEMU came by 12.45 pm. It was a ride for about 25 minutes before reaching Bishnupur.

It was safe to have lunch first, I thought. After a stroll at station premises, we selected a hotel, which was attracting us with its aroma: “Maa Gandheswari Hindu Hotel“. The hotel was small and packed, we waited for a batch to be over. 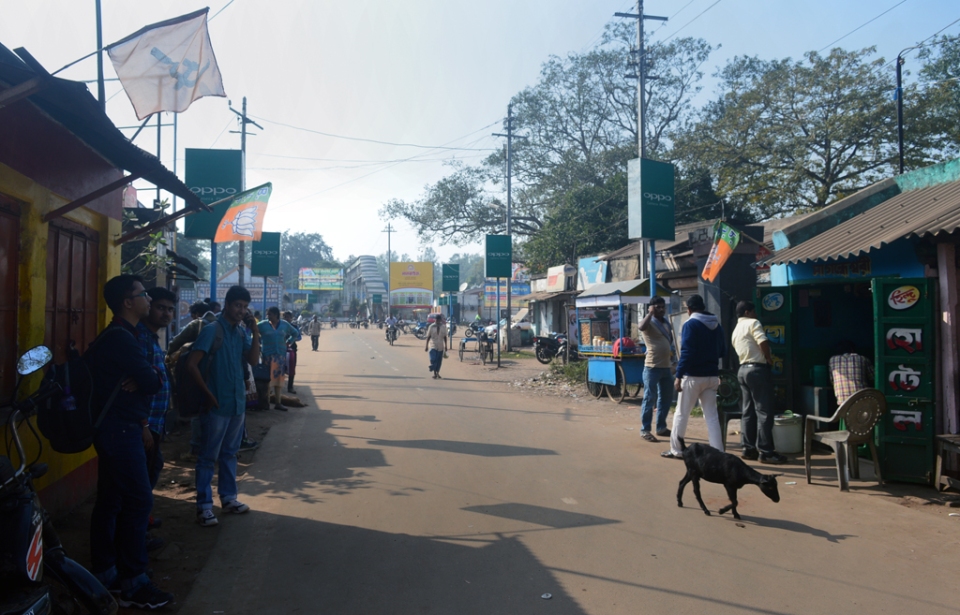 After a delicious lunch with chicken chatpati, special alu posto and all, we started searching for auto/toto. We booked an auto for 12-spot-Bishnupur-trip for Rs. 400.

We started with famous Rasmancha. At Rasmancha, we booked entry tickets, which were passes to visit all the sites of Bishnupur, for Rs. 15 per head.

The next stop was: Madan mohon temple.

Then we visited Malleswar temple … 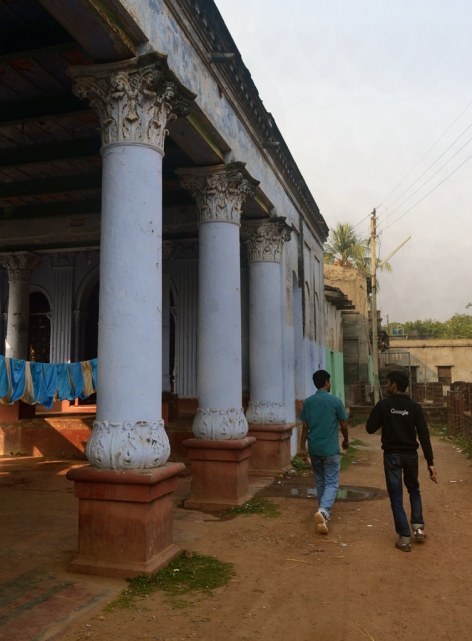 … and after that, another one named stone chariot.

We entered through the Gardarja … 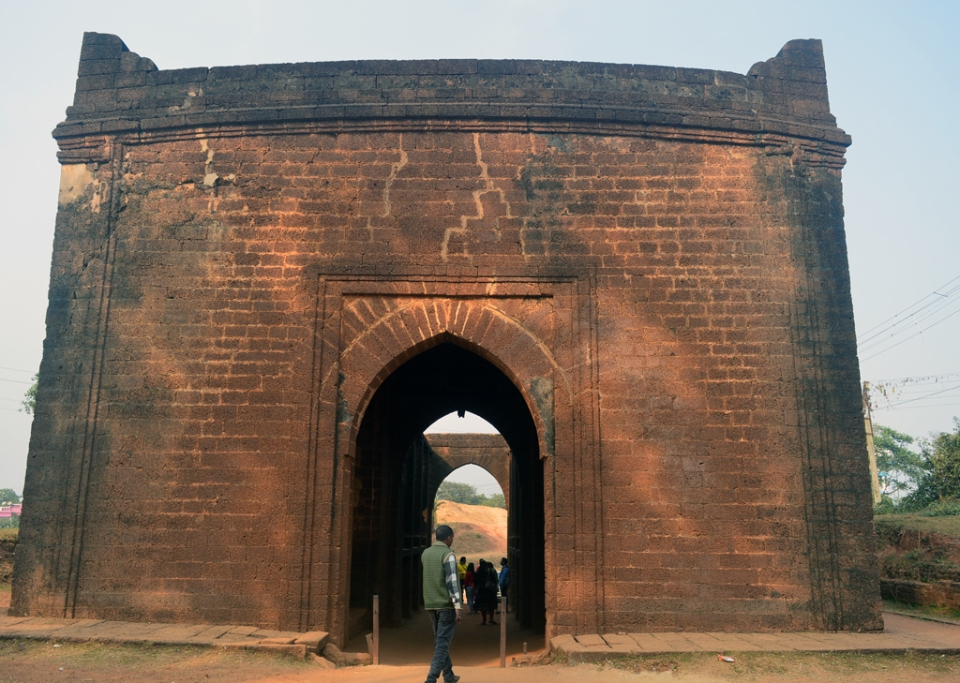 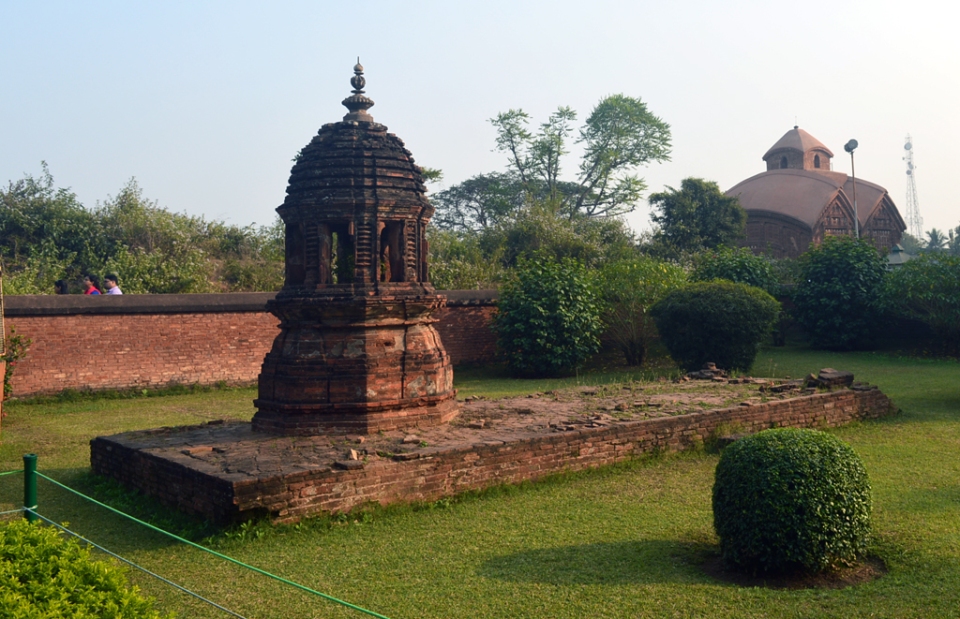 Just opposite to that was the Mrinmayi mata temple …

… and some ruins of Bishnupur rajbari. 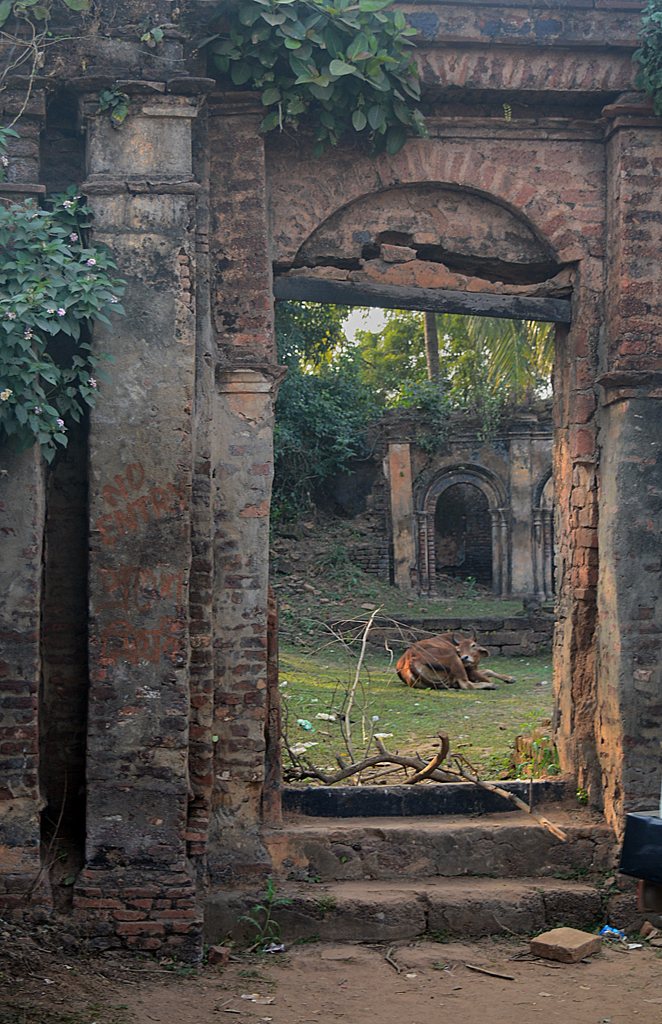 … and then Pancharatno temple which was under maintenance work by then.

Some of the terracotta works we visited were really worthy to mention. 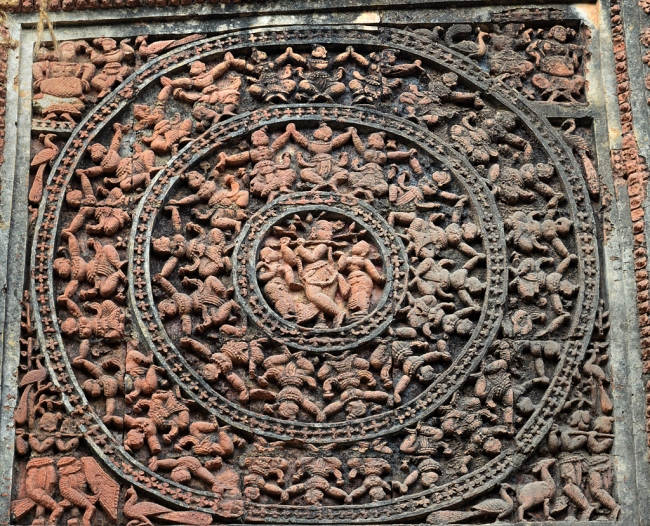 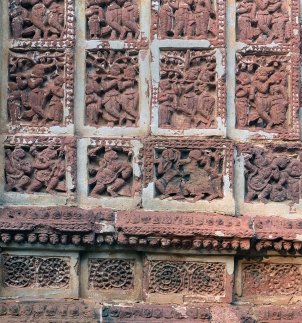 We visited Gumghar from auto on our way to …

The next stops came near Dalmadal cannon and Chinnamasta temple.

After finishing the trip in about 3 hours, we were dropped at Bishnupur station where …

… we boarded a crowded Kharagpur-Gomo Passenger. We were capturing the sunset in our camera when …

… all of a sudden, realized that we reached Bankura. 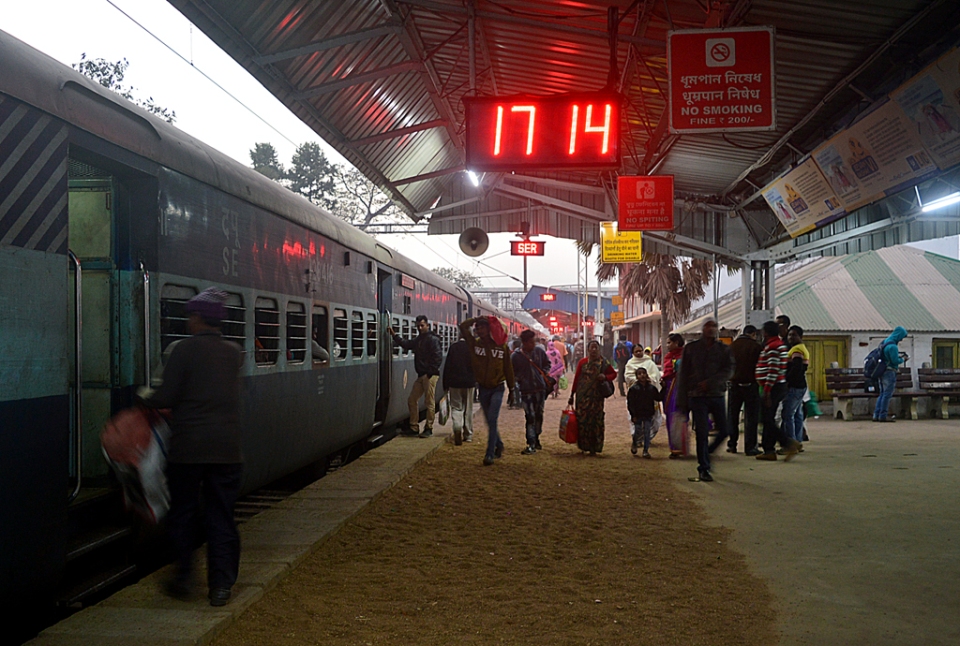 At station premises, we had tea and accounted idea about the Biharinath trip cost while conversing with some ambassador drivers. Afterwards, we walked the designated 5 minutes to reach our hotel to meet the busiest person in the world: our hotel-manager. By the time, he showed our room at least 10 phone calls interrupted our chance of further bargaining the room-rents. He showed us a dormitory with five beds (for Rs. 650) but we decided for two standard rooms we booked already. We were tired but needed to arrange our snacks and dinner. Hence, after a short-nap, we again came outside and finished snacks over tea. Near station, we collected ruti-tadka for dinner and visited the car parking once again to book the cab for next day’s trip. With the information we acquired by evening, we successfully booked our ambassador for Rs 2200. The driver  Mr. Qutub (Contact: 097323 31590), seemed very polite and well-behaved. We booked our trip at 8 am next day, reached our hotel, had dinner and slept as were too tired.

We woke up by 8 am and started getting ready. Qutub reached our hotel in time and called us. We checked-out from the hotel, boarded the ambassador and started our journey by 9 am. In our way to Biharinath, we had our breakfast with Chola-batora and also bought some bananas if felt necessary. 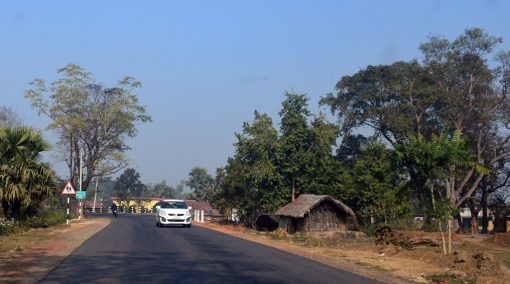 We drove through forests and villages.

I perceived a hill in Bankura district, would be somewhat like the hills we visited in Purulia: a small hillock. But Biharinath was way-bigger than that. On expressing my view, Qutub corrected me: Ajodhya hill is so big that cars run on it, so we don’t have to climb up-hills and hence, seems smaller. 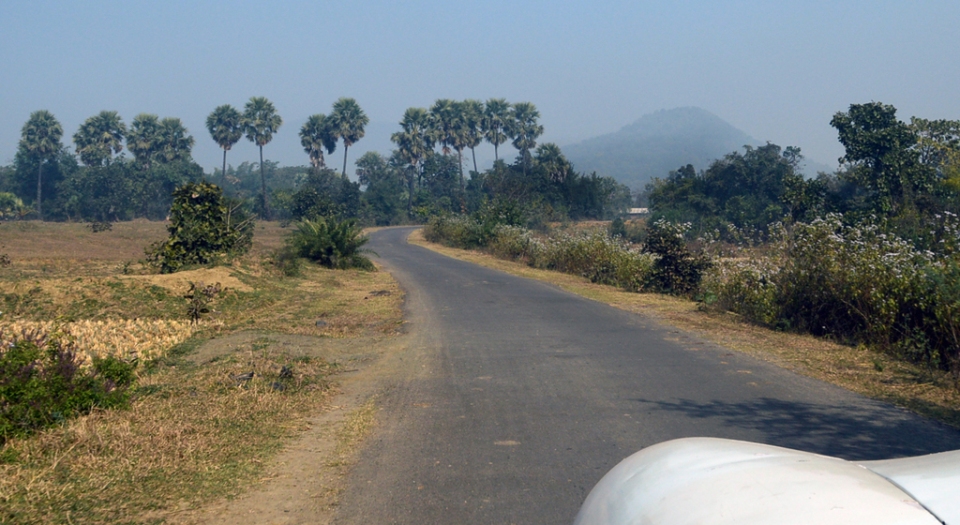 It was a tough climb; full of big stones. But three of us (myself with Subhayan and Sayantan) determined to go the whole way, while Nilay and Chandranath started going down from half-way.

After climbing for an hour, we reached the top. But the hilltop was surrounded by trees and didn’t offer any view I was looking for.

Dejected, I started coming down cautiously. There were places where you would hardly find any place to keep your foot. Somehow, we managed to come down in another good hour.

We were too tired so, quenched our thirst and tiredness with ice-cream and sugar canes. We searched for lunch near Biharinath but didn’t found any hotel there. Hence, we started for Susunia and decided to have lunch enroute.

We had some breaks at places we thought to have some photos. 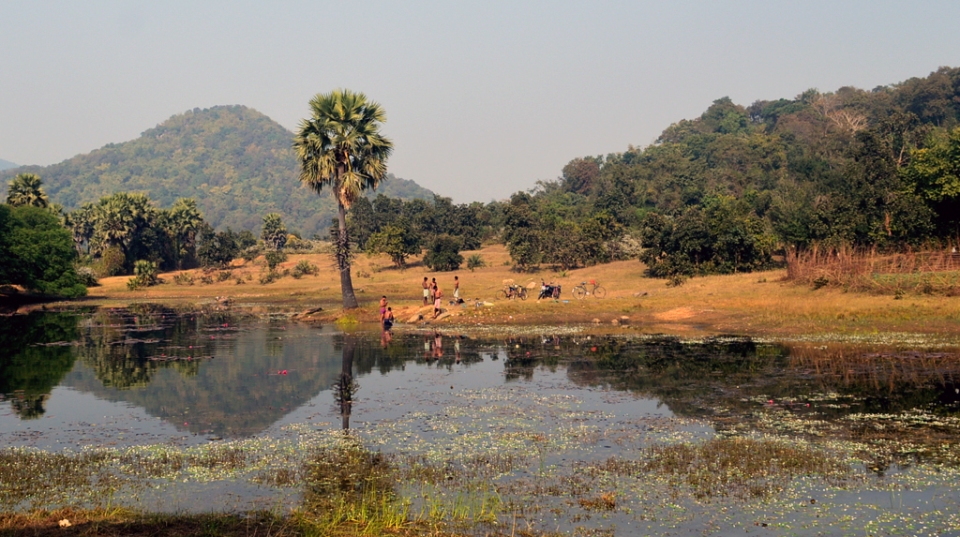 Finally at midway, we halted at a hotel and had lunch by 2 pm. After driving for 1 more hour, Susunia appeared. With two peaks: Mama and Bhagne, Susunia offered a majestic view. 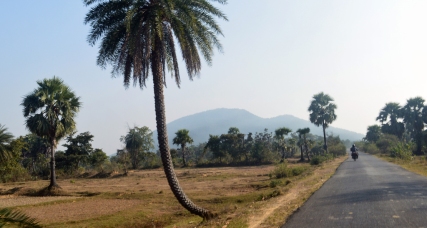 Subhayan and Sayantan was taking a short nap while getting ready to climb Susunia, while three of us planned to have a view from the base. Hence, I got busy taking photos from car.

When we reached Susunia at 4 pm, it looked like a festival-ground. Being nearer to locality, Susunia attracted hundreds of shops and thousands of people.  While we visited the shops, Subhayan and Sayantan finished their hiking trip on Susunia. They reached the hilltop of Bhagne, the smaller hill and returned back as we were short of time. 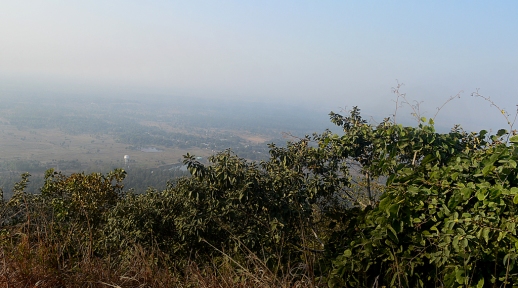 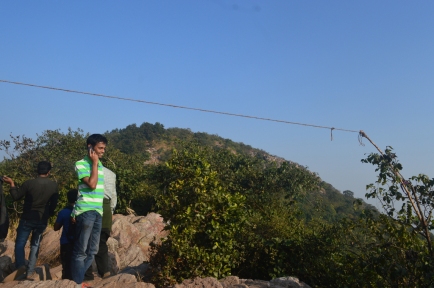 … others returning home after work and chimneys of nearby Mejia thermal power plant.

Koro was relatively much smaller hillock but when we reached the top, we got some glimpses of sunset and surrounding valleys.

Koro hill has an ashram, named Tapoban, and a durga temple on it. 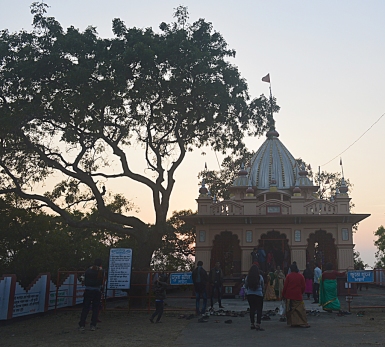 We visited the places … 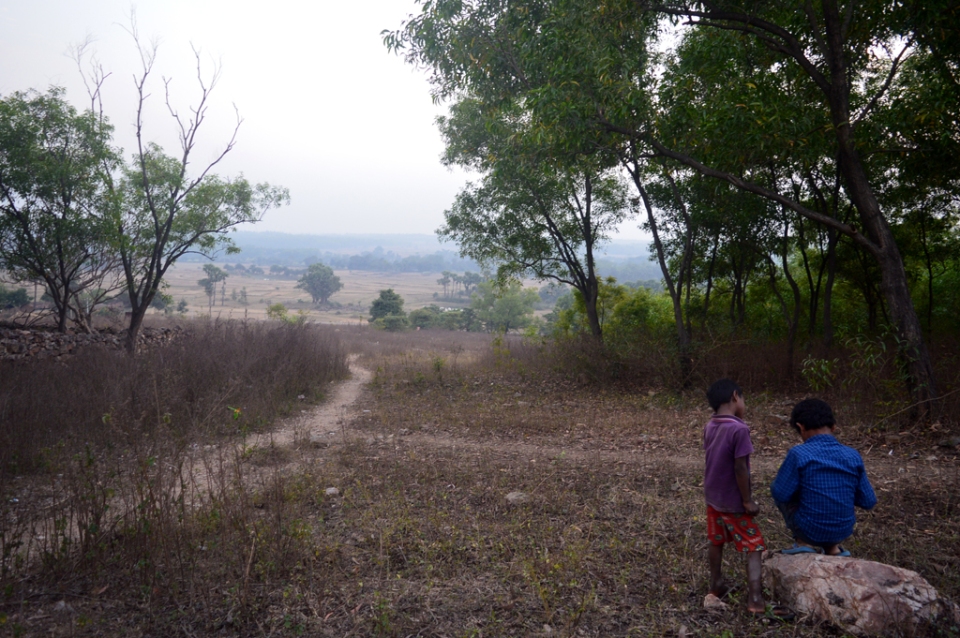 … and soon started for Bankura station.

Reaching Bankura by 6 pm, we bid good-bye to Qutub. It was a nice trip with him; so well-behaved and patient driver. He never asked to cut our trip short or forced us to hurry. I would suggest readers to book him on any trip from Bankura station. 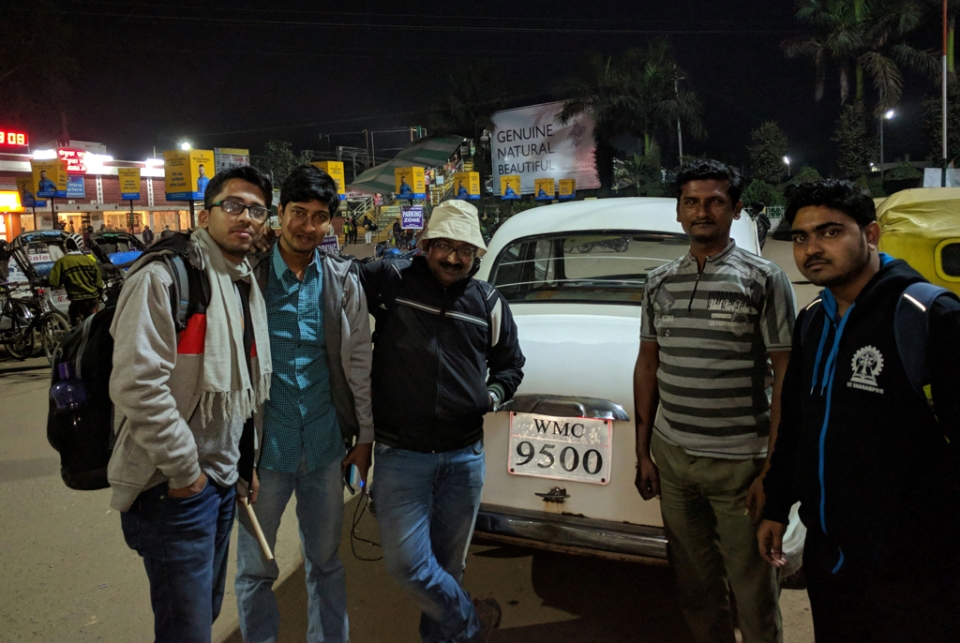 We had to wait about one hour, so had chicken cutlet and chow in snacks. By 7.50 pm, we boarded Asansol-Kharagpur passenger where we met some of our friends from our campus. Sharing experience we had in the trip, we reached Kharagpur by 11.50 pm. Only one hotel was open by then: so, we had to quench our appetite with whatever we got. By the time we finished our dinner, people started celebrating new year. We joined them for-a-while but, soon left towards campus. 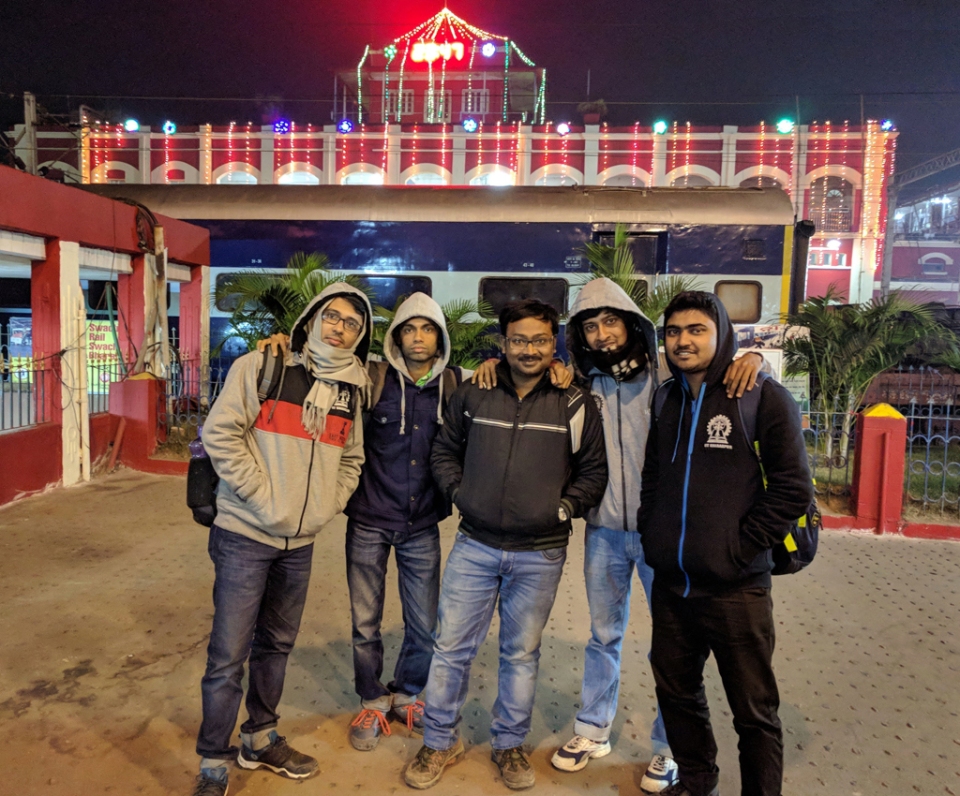 The year of 2018 started with an economic trip (cost us Rs 1200 per head); hopefully many more to come with the support holiday-calendar provided us this year, I knew.