2018 is made for trips; courtesy to the list of holidays which made passages for 3 to 4 day’s trip throughout the year. In one of such long weekends, we wanted to make some trips before winter would flee. But, availing trains and accommodations in all popular destinations seemed impossible due to late planning. Hence, we had to opt for an offbeat trip to the land of seven hundred hills: Saranda.

The location was too offbeat to obtain information on the places-to-visit from Google. But, booking budget-hotels and train tickets required no hassle. We booked tickets in Howrah-Barbil Janshatabdi Express from Kharagpur to Barbil and accommodation at Hotel Aadhar (contact: 9937623556) near Barbil station at rate Rs. 1200 for two three-bedded rooms per day. Inquiring at Indiamike and some FB groups, I collected necessary information (places-to-visit and itinerary).

We had our train at 8 am in the morning. Accordingly, we started from campus, had breakfast at a wayside stall and reached Kharagpur junction within time.

The train came in right time and we boarded our compartment crowded with tourists. Before finishing the morning nap, I got busy tracking where all these tourists might go. Eventually, almost all of them got down at Tatanagar junction leaving us to take a trail of hills and forests. The long train journey finally ended at 1 pm at Barbil station.

Though I thought Hotel Aadhar would be in walking distance, we had to book an auto for Rs. 150. We reached the hotel, finished the booking formalities and deposited our luggage at our rooms. The rooms were good, spacious and neatly decorated with necessary appliances like geyser and TV. I asked others to order something for lunch in the hotel-restaurant and left to meet the driver, the hotel-manager booked. In these trail of Barbil full of mining plants, tourists vehicles are mostly SUVs. We booked a Bolero charging us Rs. 800 / 1200 for local / outstation day trips except the fuel-charge calculated based on 10 Km/litre. To make the calculation simpler, a local day trip of 60 Km will cost Rs 1220 (Rs. 800 and fuel charge of Rs 420 considering diesel cost Rs 70 per litre). After booking the car, I joined others for lunch. The food was of poor quality and over-priced (cost us Rs. 1000 for 6 meals). After lunch, we tested our cameras in front of the hotel until the car got ready.

Finally, we started at 2.45 pm. On our way, our driver Sukdeb da (Contact: 9438710840) informed how economic it would be if we could contact him directly. It was obvious but, I couldn’t help as didn’t get any cab-details while going through related blogs and forums. However, Sukdeb da knew the trail very well and understood what kind of spots we are looking at. This was important as 2 days were not enough to visit all the places as they were scattered across and the inconsistent road-conditions due to the mighty dumpers from mining plants. 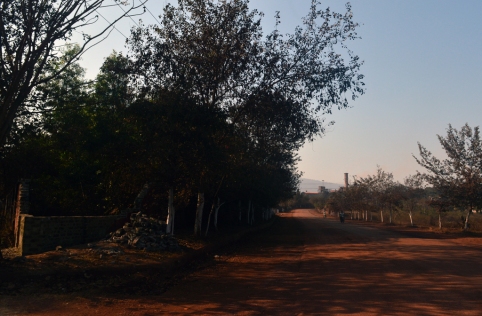 The whole town is surrounded by numbers of hills though due to fog, only a few were visible near demarcation. But, Barbil can also be called as the land of seven hundred bumpers. To limit dumper’s atrocities over other vehicles, those were necessary, Sukdeb da told.

To test our taste and his comprehension, Sukdeb da started for Jhikra falls. After a bumpy drive of about 30 minutes, we reached the spot. 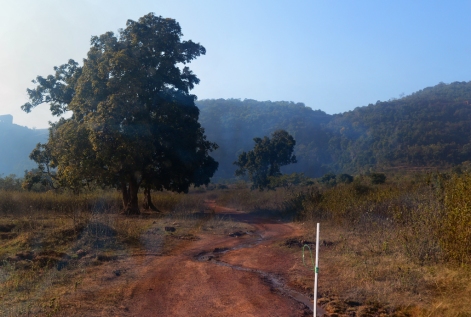 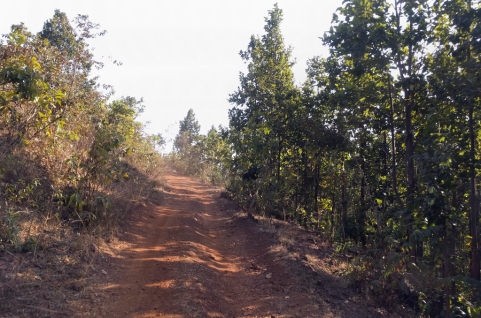 We cut our way across jungle and hiked a bit over stones lying through the stream. But, even this short distance could be difficult for elder people, I felt. 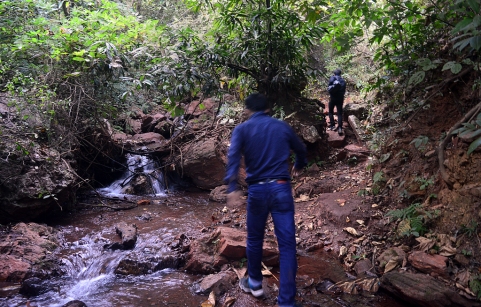 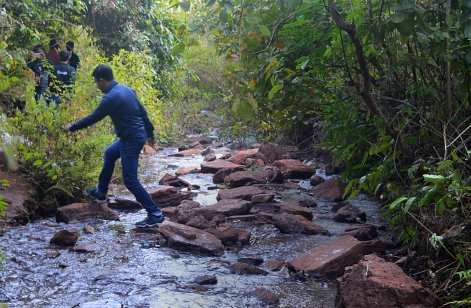 Showing little balance and agility, we moved on … 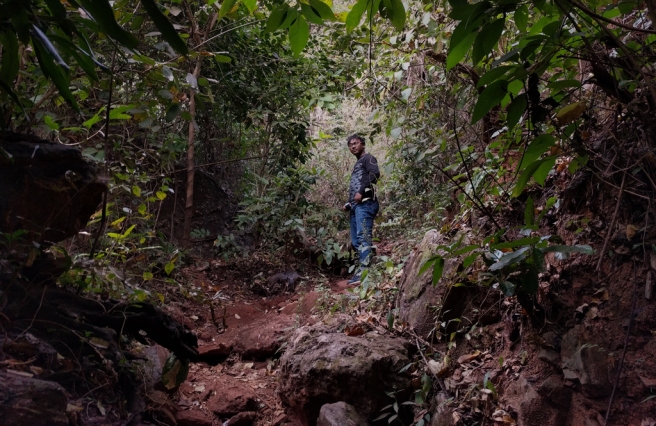 Watching Jhikra after a long journey, my fellow travellers got carried away. 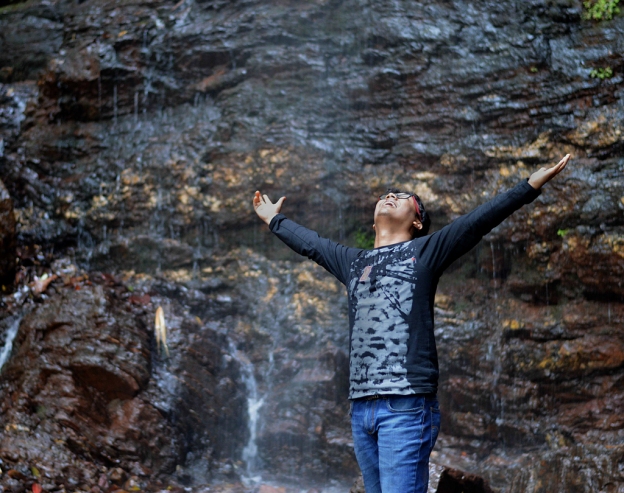 The tranquillity and wilderness of the place created a paranormal vibe. 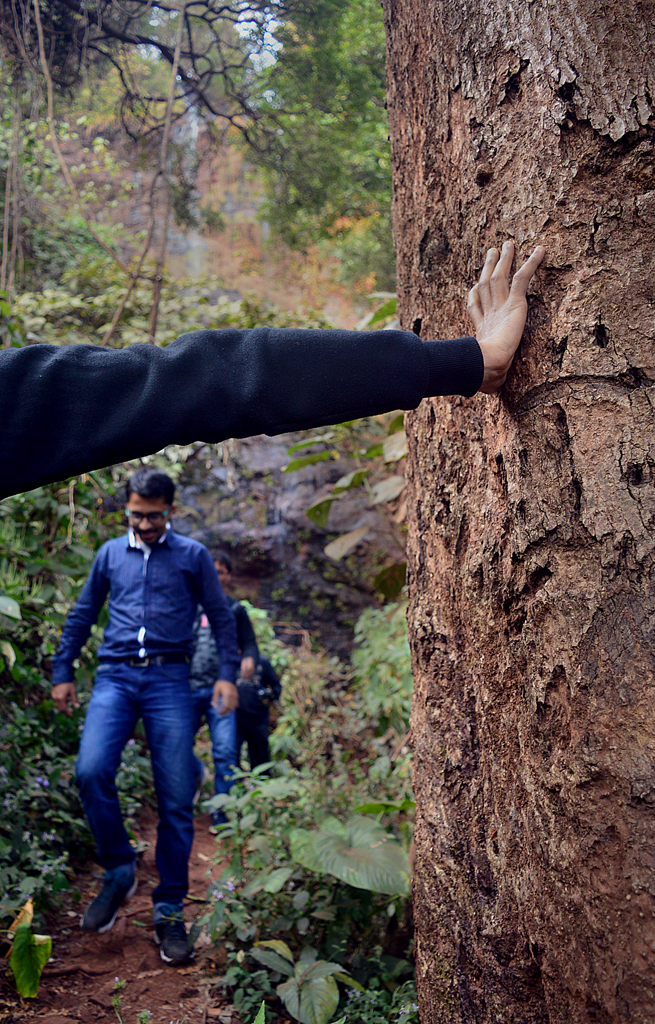 We again moved through the dusty roads …

… towards the sunset viewpoint, Kiriburu. We spent some time in the local market … 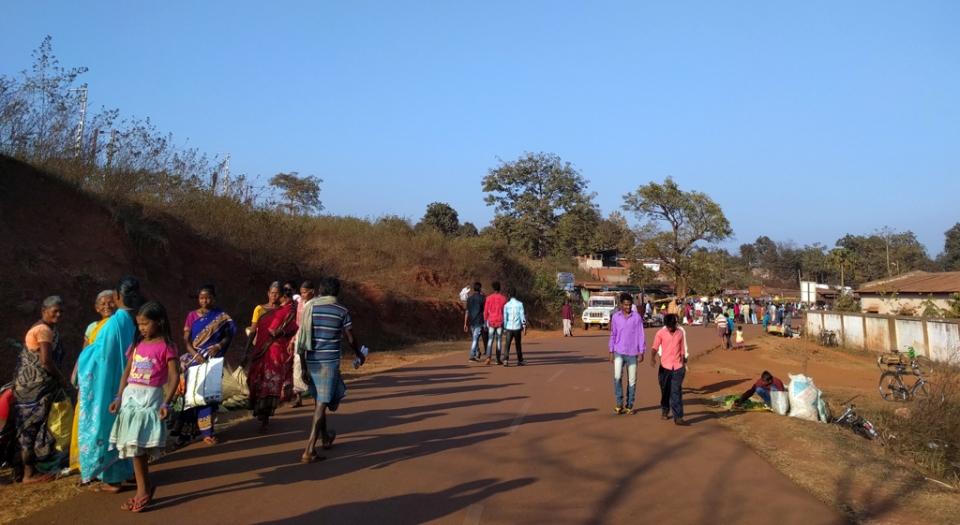 … and reached the viewpoint finally by 4.30 pm. 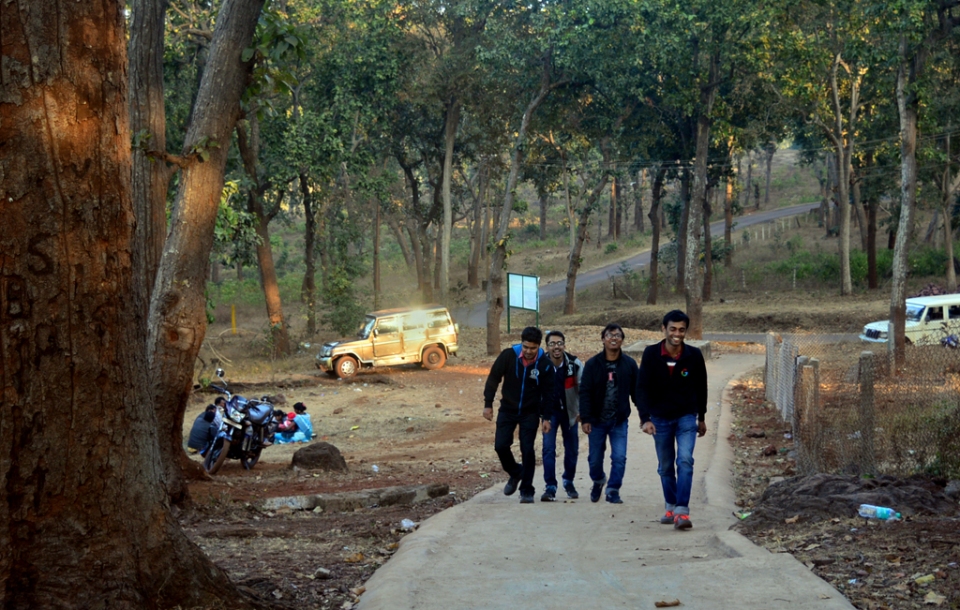 Sunset was expected on that day near 5.15 pm. So, everyone was busy gossiping or taking frantic selfies. 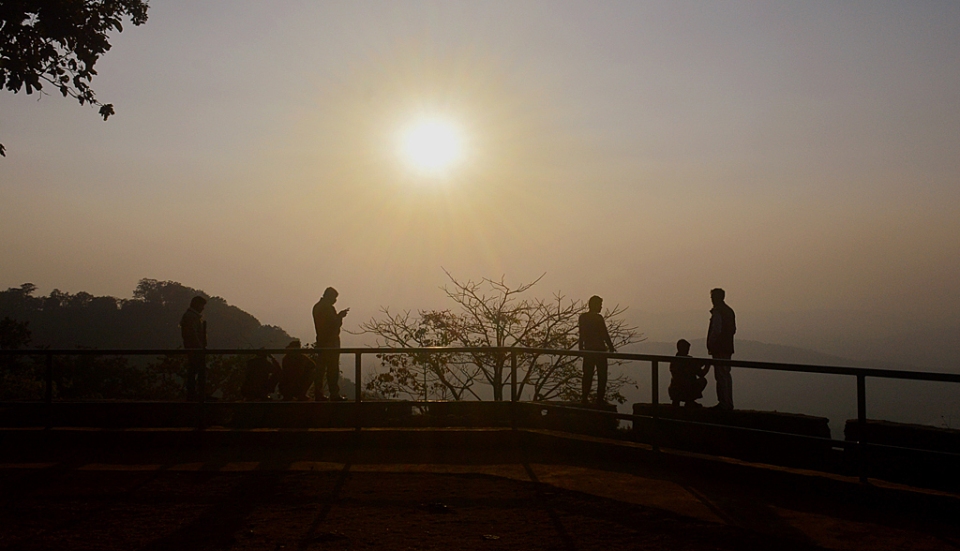 Like a train would come to take us home, we started lining up by the railing after 5 pm but the train came late.

However, due to heavy fog, the layers of hills were not visible.

Sukhdev da dropped us at the hotel by 7 pm. Accompanied by Subhayan, I came out of the hotel once again to arrange some medicines and dinner. We bought roti-tadkas near the township to compensate the lunch-budget. The hectic day ended soon.

I was in the middle of a dream when the bell rang. It was Tilak; he had some medical emergencies at home and needed to leave. After Tilak left, we woke up one-by-one; so, ordered teas. A good-hour flew by the time we got ready and finally, we started by 9 am. We had planned for a long outstation trip so, started as early as possible and had our breakfast with Alugobi paratha and ghugni outside the township.

I informed Sukdeb da with our plan to visit four waterfalls: San Ghagra, Bada Ghagra, Khandadhara and Handibhanga and sat relaxed in the front seat watching whatever came by. 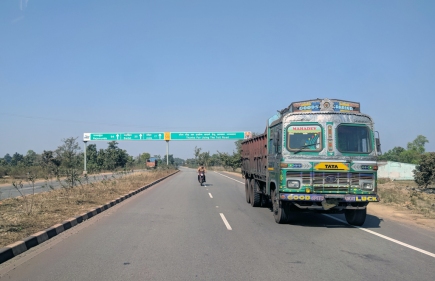 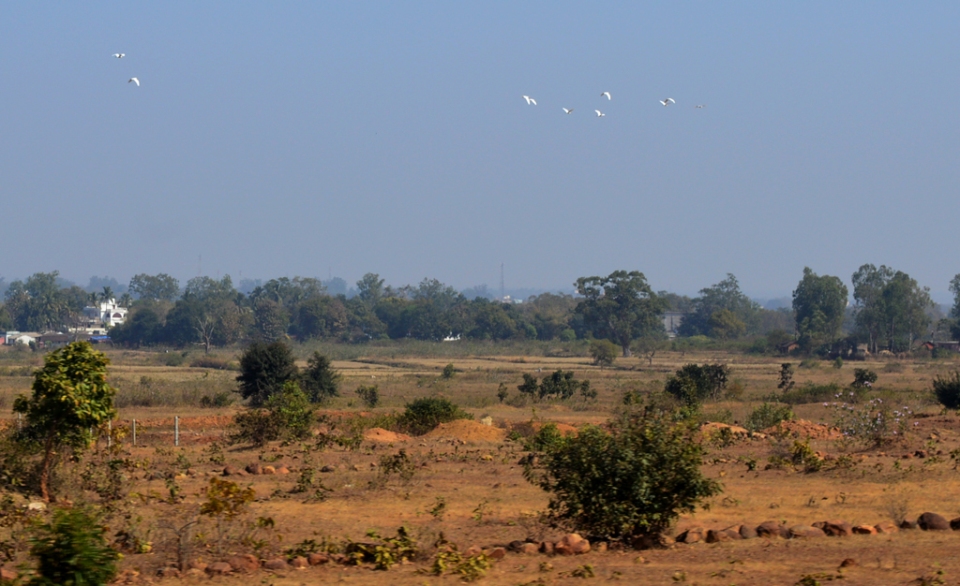 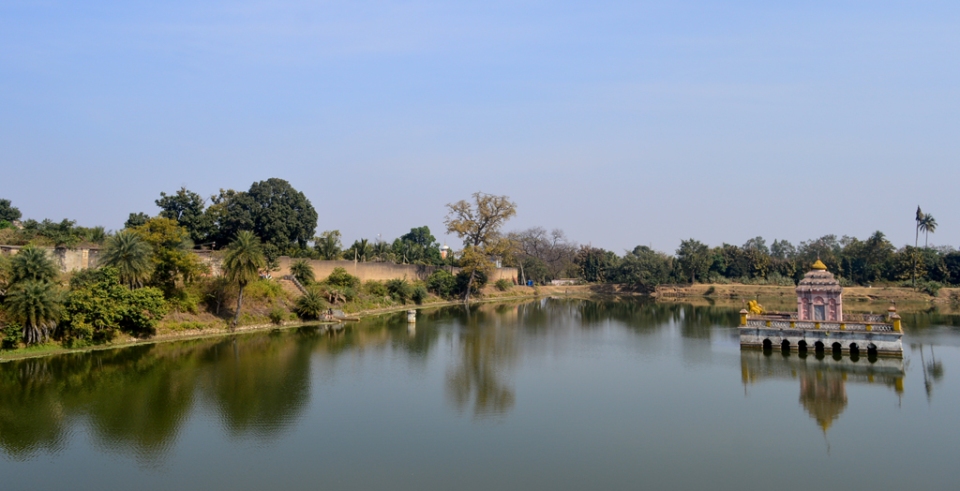 At a point, GPS suggested me as if we were crossing San ghagra waterfalls: our first spot. On asking, Sukdeb da told that hotel-manager Santosh da asked him to show the famous Tarini temple at Ghatgaon first. Thinking what worse it could be to visit a near-by temple, we agreed. But when the temple appeared after 1 hour, 50 Km and after crossing two unnecessary tolls, I got furious inside but concentrated on the temple.

I couldn’t shower my anger on Sukdeb da lest he might hamper the rest of the journey. I felt down as we had to suffer the loss for these redundant 100 Kms (cost Rs 700 plus tolls). But, Sukdeb da offered us one extra spot to compensate our loss: Gundichaghai waterfalls. After a ride for 10 more km, we reached the falls by 12 pm. We paid the parking charge of Rs. 30 and subscription charge of Rs. 10 for some would-be festival and moved on.

The falls was made accessible in all possible ways: provided staircases and connected all edges with bridges.

Localites hadn’t missed the Saturday morning but, attended picnics near the falls. To attend them, numbers of shops were also present with snacks and ice-creams.

We couldn’t waste much time if we had to visit all the waterfalls we planned. Hence, we returned to parking early to face another problem. Some cars had been parked blocking our car from all directions except one where the fence was. Sukhdev da broke a part of the fence, the car fell in a ditch, we put stones to make steps, pushed the bolero and started again. Sukhdev da took some short-cuts and reached the highway soon.

The road (State Highway 20), being smooth and stretched to infinity, gave us some edge over time.

At some points, it seemed as we reached a foreign country … 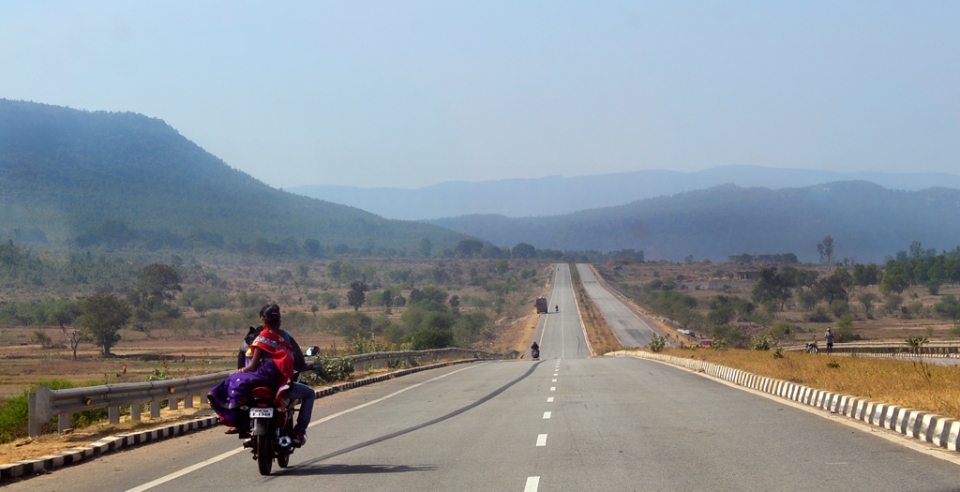 … unless some herds of cows appeared. Finally, we reached San Ghagra waterfalls by 2 pm. It was a closed complex comprising a park, food stalls and the falls itself. We booked entry tickets (Rs. 15 per head and Rs. 20 per car) and entered the complex.

Walking around the park, we came near the fenced falls. 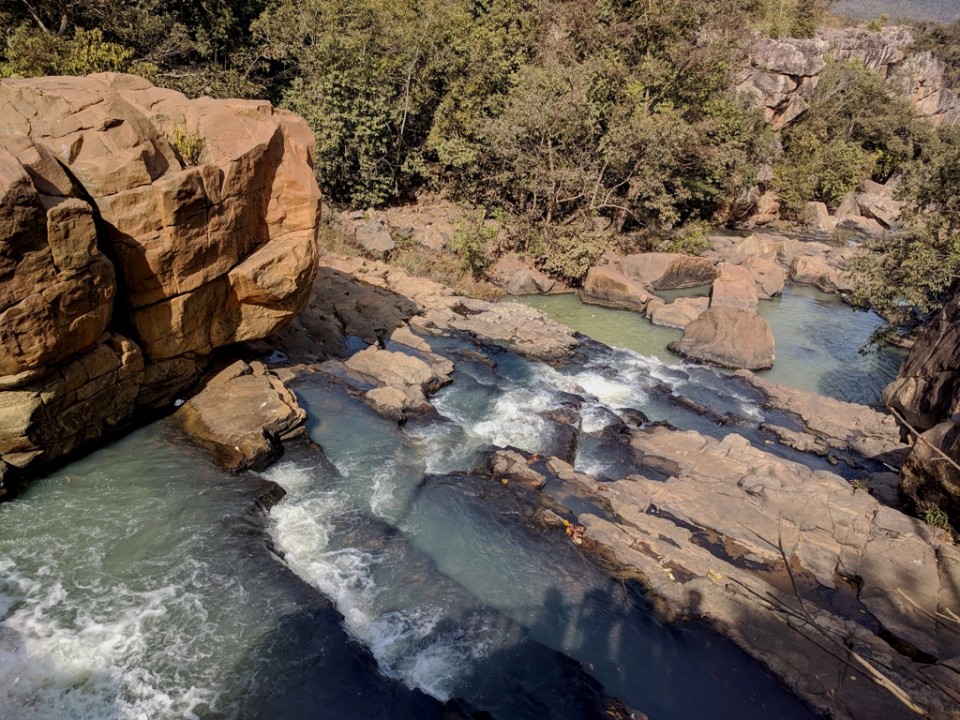 We got refreshed a bit, ordered chow min from a stall and started by 2.40 pm. The next stop was: Bada Ghagra waterfalls, 4 km away. We reached Bada Ghagra by 3 pm, visited the falls and started without late.

I don’t like visiting places in a hurry but couldn’t help. We moved on through the highway and soon came to village paths. In those regions, the hills were structurally different: almost all the hills ended with some cliffs instead of getting gradually declined.

Seeing the cliffs, I thought we were close to Khandadhara. But, we had to take many turns to reach the right side of the cliff. Finally, I could see the falls from the car; still around 1 km away. 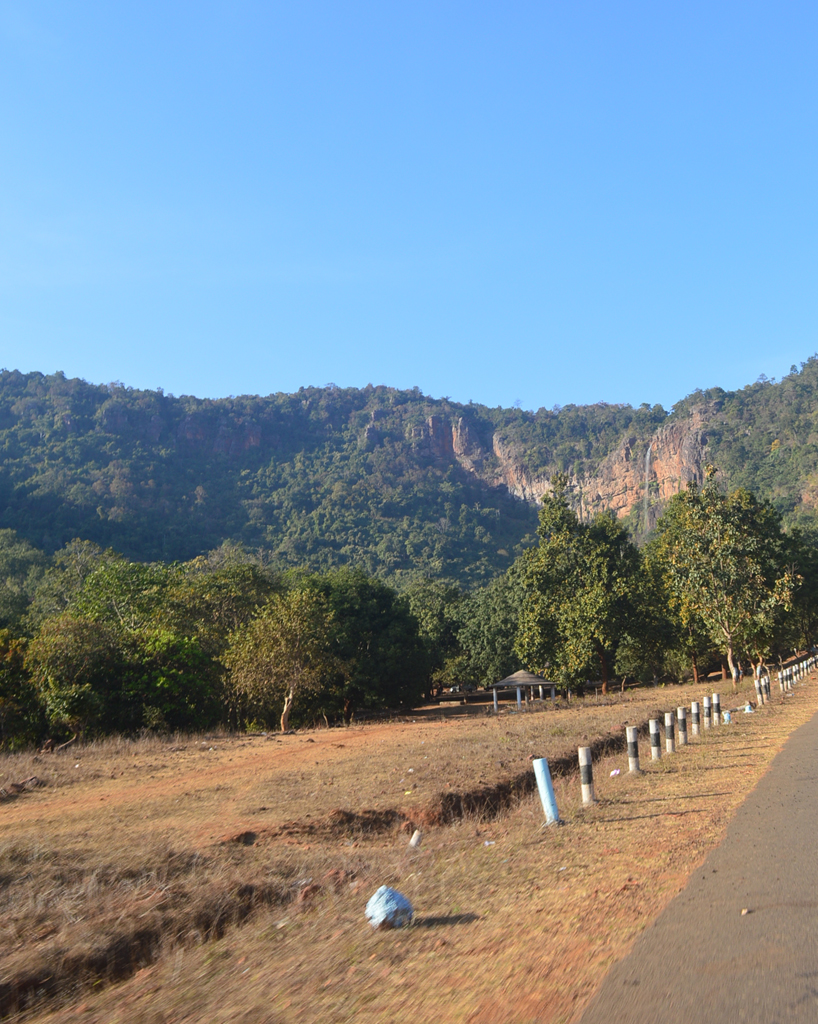 By 4 pm, we reached the astoundingly 152-meter high Khandadhara waterfalls of Kendujhar. Crossing the concrete stair-cases, we came to the view-point.

One needs wider than 18 mm lens to capture the whole falls. So, I took a panorama.

We were getting late for the last stop, but couldn’t leave the amazing falls sooner. We sat near the view-point enjoying the falls and visiting the layers of hills we missed yesterday at the sunset viewpoint at Kiriburu.

Finally, we came down and started towards Handibhanga waterfalls by 4.45 pm. Cutting the forests away, we moved on for about one hour to reach the falls. There was a Shiva temple in front of the falls. In a hurry, we just took a photo of the temple from outside and rushed to the falls.

To reach the falls, we once again hopped through stones. We had to switch our mobile torches on to keep our steps safe. 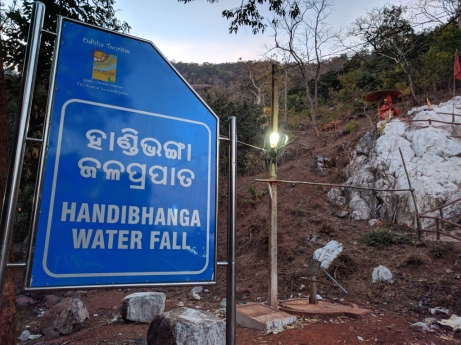 To capture the majestic falls, we tried high apertures or long shots due to darkness.

It would be great if we could wake up a little early, we thought and get back sadly. While returning, we got stuck in a jam of dumpers. Numbers of dumpers blocked the road trying to make a double-lane, so we had to return and take another way. It was a long ride until we reached Barbil town by 9 pm. Near the town, we took tea and bought dinner from wayside dhaba. After dinner, we didn’t have the energy to check the photos or gossip; we hit the bed hard and long …

… long enough until it was 10 am. We woke up late as we had nothing to do. We got ready, conversed with hotel-manager, paid the bills and checked out by 12.30 pm. In a hotel near Barbil station, we finished our lunch with delicious fish-meals in a rate (costed Rs. 40) which doesn’t fit with Barbil. We hardly sat at the platform for 10 minutes when the train arrived. 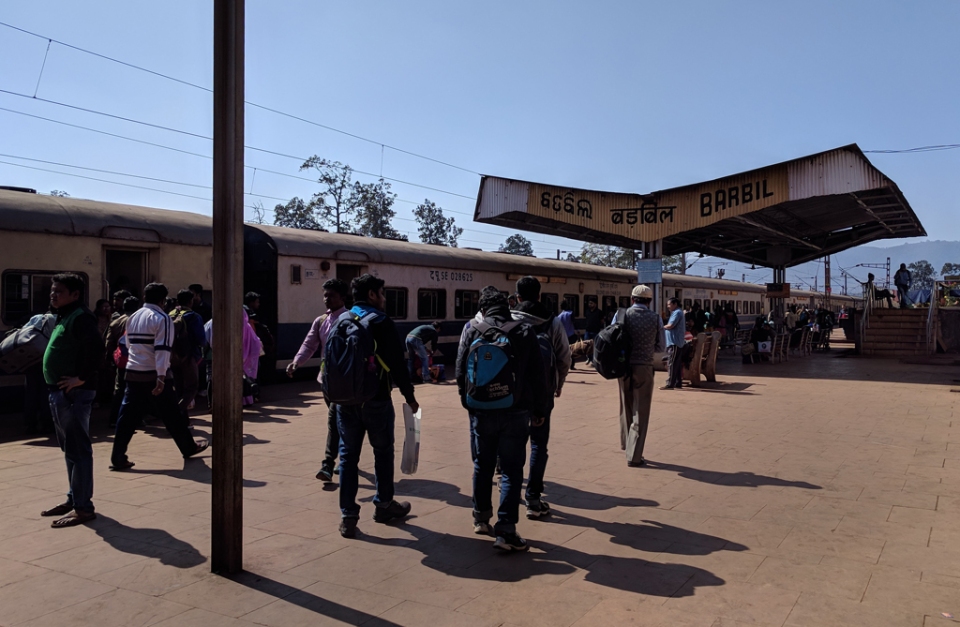 We boarded the train thereafter but, started at 1.45 pm. I advised everyone to take naps wherever as by Tatanagar junction, the train would get crowded. Trying to be an exemplary, I slept soon but, was capturing casual moments in some sleepless minutes.

Not surprising us, train got fully packed at Tatanagar and we had to move to our original seats. Seating side-by-side, we calculated the trip expenditures (Rs. 2200 per head) and finalized the next one, the one which got deferred. We reached Kharagpur by 7 pm, took tea at station premises and left for each one’s hostels thereafter.